In an outrageous act of animal cruelty occurring on Monday in Weihai, China’s Shandong province, witnesses tried desperately to intervene after seeing a tethered dog running after a vehicle, reports AsiaOne. 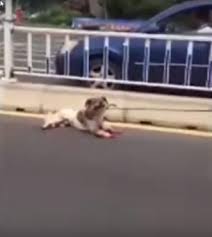 In a viral video, the long haired brown and white dog is first seen running as he tries to keep up with the moving vehicle. The car then picks up speed and the dog struggles to keep up, but then falls and is shown being mercilessly dragged along the road. Witnesses  were so outraged they surrounded the vehicle forcing it to stop. The dog died  at the scene from his fatal injuries. 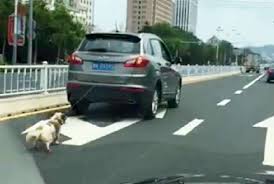 According to the South China Morning Post, angry animal advocates  attacked the man identified as 43-year-old Qi. Police later arrested Qi and at least four people who had been involved in the fight. The repercussions of the video and pictures posted throughout social media have erupted into widespread condemnation demanding Qi be punished. 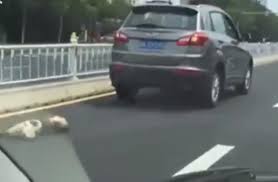 A relative of Qi has since come forward stating the dog had rabies and had bitten people that morning. The dog owner had intended to take the dog for treatment, but the dog refused to get into the car so he decided to drive slowly and drag the dog behind. 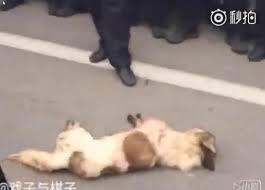 The video is extremely graphic and disturbing.

Dozens of dog beds donated to lonely and sad shelter dogs Afraid and alone, 3 dogs left behind at shelter as their family moves away
Scroll to top