In what could be termed “things that go bump in the night,” comes the unnerving report from Casselberry, Florida of a 73-year-old woman finding snakes crawling out of the walls of her apartment. 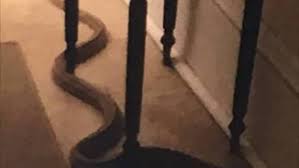 According to Click Orlando, Jan Perillo said saw snakes slithering out from the inside of the walls of her Regency Oaks apartment.  And as she picked up the carpeting, there was another and another -snakes totaling to at least a dozen crawling around. At first, Perillo tried to get rid of them herself, and hadn’t been able to sleep for days.

“I had my cane in one hand and my grabber, and I’m grabbing these snakes and, like, carrying them out.

Calls to the apartment complex manager went unanswered for days. Finally a pest control company showed up on Saturday; removed the thirteenth snake. Video taken by the woman’s daughter Bonnie showed one of the snakes at least two feet in length. Meanwhile Jan is staying at a hotel.

In order to make sure all of the snakes have been removed, the apartment complex  will have to hire a company to treat the inside and outside. It is not known when that will happen, but for now Jan is staying at a hotel, and paying for the room out of her own pocket.