You are here: Home1 / News2 / animal cruelty3 / Dotham man sets turtle on fire while live-streaming to get Facebook vi...
Spread the love
Tweet

A Dotham, Alabama man faces felony animal cruelty charges  after he live-streamed on Facebook a disturbing crime as he poured alcohol on a turtle and set it on fire, reports the Dotham Police Department. 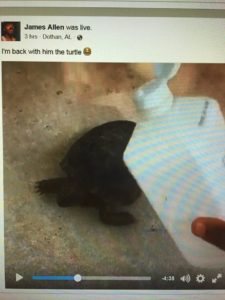 According to the Dotham Police Department Facebook, Terrance Allen of Chickasaw Street in Dotham was shown on live video pouring alcohol onto the top of the turtle and commenting:

And then Allen lit the turtle on fire. He continued:

Numerous people called the Dothan Police Department who then located James Allen and took him into custody. James Terrance Allen has been charged with aggravated animal cruelty.

“He was still outside and the turtle was still there. There were some people who actually took a picture of him getting arrested,” stated Dotham Police Captain Will Benny. “He gave a statement, and he said he was doing it for the views,” Benny said. 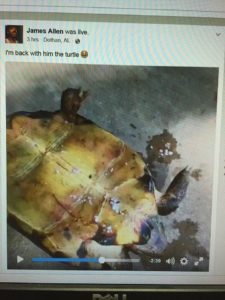 According to the Gotham Eagle, people started a movement to get the abusive video removed from Facebook. Authorities have a copy of the disturbing video to be used as evidence.

The turtle was located and taken to the Dothan Police Department Animal Services Division until transportation for rehabilitation could be arranged. The turtle, who has been named “Leonardo” is expected to make a full recovery and hopefully released back into the wild.

Allen was transported to the Dotham City Jail and bail was set at $10,000. He already carries a previous felony record for burglary and possession of an altered firearm charge. He received a 46 month prison sentence in April which was suspended for three years probation.