On Friday, the trailer of the new movie, “A Dog’s Purpose” hit the Internet hard, leaving most dog lovers with an emotional lump in their throats that touches us to the deepest depths of our hearts. 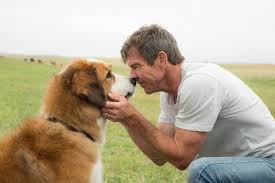 The movie stars Josh Gad, who is the main character and voice of a dog reincarnated at least four times – each time with a different purpose and a different human companion, but each time equally as profound and emotional. And each time the dog seeks “his purpose in life” and life’s most basic question: “Why are we here?” And as the movie trailer just happened to have been released on National Dog Day, we wonder if that was all planned?

At the beginning of the story, it’s about a dog and a little boy. During his numerous lifetimes, his humans named him Toby, Bailey, Ellie, Bear and Buddy. At one point he notes, “If I can get you licking and loving, I have my purpose.” And if that isn’t enough, the end of the movie reunites the soul of Bailey with his original human – now all grown up and wondering could it really be?

The movie is based on W. Bruce Cameron’s book and includes stars as Dennis Quaid, Britt Robertson and Luke Kirby. The movie is set to be released on January 27, 2017.

Take a look at the trailer – it explains a lot. Bring your tissues!