A bizarre scene  caught on closed captioned television video played out in Murmansk, Russia recently when a car owner saw his Volkswagen Tiguan being vandalized, reports the Metro. 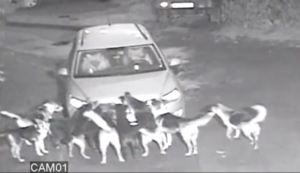 At first, the car owner, Denis Makarovhad thought a group of hooligans had decided to vandalize his car as a sick joke, but soon realized the culprits were actually a pack of eight stray dogs. No one knows why the dogs decided to bite and scratch at the car; maybe they didn’t like Volkswagens Denis pondered. The dogs, however were quite destructive; they ripped off the wheel rims and scratched the paint and the radiator grill.

Fortunately, the gang of pooches quickly lost interest and went about their vandalism somewhere else. This isn’t the first report about dogs vandalizing cars in the area either. No word – however if the other vehicle was also a Volkswagen.

Although there hasn’t been any explanation for this latest canine rampage, in March 2015, a dog in Chongquing, China got even with a motorist after the car owner kicked the dog because the pup had been lying in the the man’s parking spot. The dog disappeared but came back later with his canine friends and took appropriate chunks at the wheel rims and the windshield wipers. Score one for the pups!