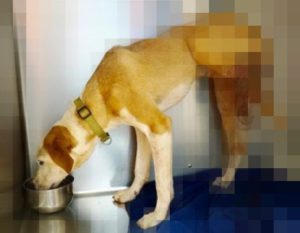 A Georgia-based rescue agency is hoping to save a severely injured dog who was discovered on a dirt road with one leg torn off. According to Angels Among Us Pet Rescue, the dog, whom they have dubbed “Bravery,” appears to have lost his leg after it was caught in a trap.

The rescue agency wrote, “We’ve heard he was caught in a bush but it sure looks like it was caught in a trap. Someone tried to bandage what was left of his leg but they didn’t take him to a vet. He was found on a dirt road. And animal control is begging us for help.”

The photo of Bravery’s injury is disturbing – the flesh is torn and bone is exposed. Though the image is difficult to view, the rescue group has begged its followers to not look away – On Wednesday they wrote, “This is going to upset you and the photo is graphic. But please please we need you!! Don’t look away. For this poor poor dog’s sake, please don’t look away.”

The group has asked that donations to help with Bravery’s care be sent in one of the following ways:

Note: Bravery is in the ATLANTA area.

(Photo via Angels Among Us Pet Rescue)