Taunton Police Officer Evan Lavigne is a kind-hearted, dog loving cop who was able to reunite the families of two lost pooches by posting selfies or what has been coined “dog-fies” with them on Facebook. 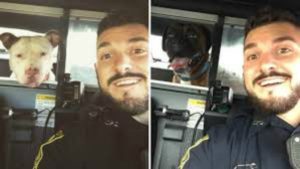 After receiving a call about a lost dog, Officer Lavigne ushered the friendly and quite adorable pup a ride in his squad car. Not long after the two posed together and Animal Control was notified, pooch and his family were reunited.  Just one week earlier, another lost dog was found in a different location, but a friendly police demeanor and  a bag of Slim Jims brought about continued harmony in the plight of two lost canines looking for their families. According to CbsBoston, both dogs have since been reunited.

“The first dog that I ended up getting in the back of my car was stuck inside a bank. The manager locked him inside because people are typically scare of that breed of dog,” explained Officer Lavigne to Inside Edition.

The second dog had been tied up at a convenience store. Again, because of his breed, even though the dog was extremely friendly, customers were afraid to enter the store.

“…he went right in the back of the car and Animal Control was already on the way so we just hung out in the parking lot,” stated the dog whispering cop.

Do we not need many more police officers just like Officer Lavigne? Good work officer and thank you for your service.