You are here: Home1 / News2 / Dogs3 / dog abuse4 / Dog weighed down with sledgehammer drowned in river
Spread the love
Tweet

In a disturbing case of animal cruelty, a Busselton, Australia fisherman wept after pulling a dog out of the water who had been weighed down to drown with a sledgehammer attached to its chain collar, reports the WAToday. 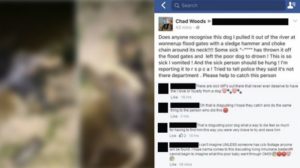 Chad Woods was fishing near Wonnerup, east of Busselton, on Wednesday when he made the shocking discovery. The dog’s body had been half hanging out of the water, and because the water was clear – he could see the attached rope and hammer attached. He pulled the dog’s body out of the water and reported the tragic animal cruelty situation to the RSPCA.  Woods posted an image of the dog to the Busselton Community Postings Facebook page, in the hope of identifying the dog and who had committed the act. In the post, Woods asked:

“Does anyone recognize this dog I pulled from the river at Wonnerup flood gates with a sledge hammer and  choke chain around its neck! Some sick ***** has thrown it off the flood gates and left the poor dog to drown! This is so sick I vomited! And the sick person should be hung! I’m reporting it to the RSPCA. Tried to tell police but it’s not there (sic) department. Please help to catch this person.”

According to the Busselton Mail, authorities have found the dog’s owner and are now investigating the case.

“We are dealing with yet another case of horrific animal cruelty,” RSPCA WA chief inspector Amanda Swift said. “We urge anyone with information relating to this incident to please come forward.”