You are here: Home1 / News2 / Dogs3 / Dog sealed in garbage bag inside of wood crate on 90 degree day recove...
Spread the love
Tweet 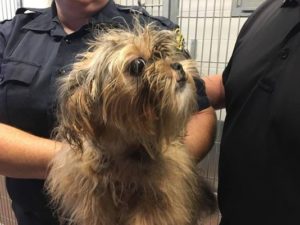 A small dog left wrapped in a plastic garbage bag on a 90 degree day outside of the Woodhaven and Trenton Animal Shelter in Woodhaven, Michigan is recovering, reports The Detroit News. 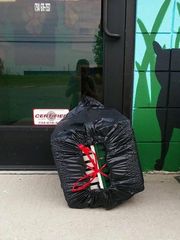 The two-year-old terrier, Shih Tzu mix now dubbed Gladys had been abandoned inside of a locked crate wrapped in the trash bag; her coat was extremely matted, she was infested with fleas and suffers from a broken leg. According to Woodhaven Police Sgt. Frank Zdankeiwicz, as of Wednesday, Glady’s condition has improved. The dog is currently under the care of a local veterinarian and will be transferred to the rescue group, Last Day Dog Rescue where she will be in foster care until the case is solved. 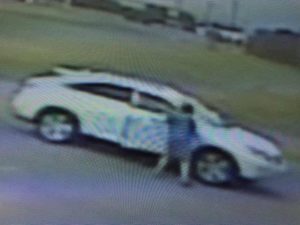 On Wednesday, People for the Ethical Treatment of Animals (PETA) offered a $5,000 reward for information leading to the arrest and conviction of the person responsible for abandoning the dog. On a surveillance video, a woman driving a light-colored 2010-13 Lexus RX SUV was seen near the shelter.

“It took a dangerous lack of empathy for someone to lock a dog in a cage wrapped in plastic and leave her to suffer from heatstroke or endure a slow, agonizing death by suffocation,” stated Colleen O’Brien, vice president of PETA.

‘Charm’: Beauty in the eyes of the beholder
Scroll to top