On Friday a judge sentenced an Alton, Illinois man to probation after he pleaded guilty to slitting his dog’s throat and leaving the dog along the Alton Mississippi River to languish in excruciating pain and die, reports the Telegraph. 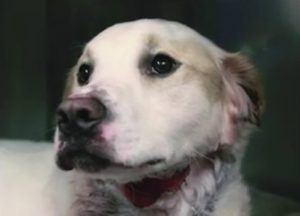 Richard M. Kreib, 32, of Spring Street pleaded guilty to one count of aggravated animal cruelty after his dog was found during Thanksgiving 2015 lying in a pool of blood. Casey, the spaniel mix was rushed to an animal hospital after Kreib used a 4×8″ knife to cut his dog’s throat after the pet allegedly attacked the man’s young son.

Assistant State Attorney Ryan Sweet told Associate Judge Neil Schroeder the defendant committed a cold-blooded act of cruelty, and instead of slashing Casey’s throat, Kreib could have taken the dog to a kennel or purchased a soft muzzle.

Krieb had been in the Madison County Jail for the last seven months since his arrest on December 31. Judge Schroeder sentenced Krieb to 30 months probation and pay restitution to Partners for Pets for $1,000. Krieb must also undergo an evaluation of his mental health and agree to receive treatment for his alcoholism.

Casey remains in the care of Partners for Pets. According to the organization’s Facebook page, Casey is a wonderful and gentle dog.  For information on donating or adopting Casey, go to  www.partnersforpetsil.org.

Heartless culprit drives away after abandoning mother dog and her 5 puppies... The shocking loss of over 300 reindeer in Norway
Scroll to top