A man riding his bicycle near the river Vrbas in northwestern Bosnia, in the city of Banja Luka, heard the plaintive cries of a tiny dog calling for help, reports the Sunday Express. Sasha Makivec found the shivering dog tied to a rock unable to escape. Within minutes, Sasha knew the dog would have drowned or died from pneumonia and quickly untied the frightened, very cold pup.

“I crossed over to the other side of the bridge and took the dog out of the water,” stated the dog’s miraculous rescuer. 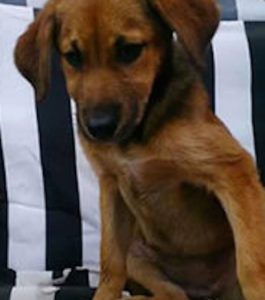 The dog was so scared he wouldn’t move. A rope had been tied around its neck and the other end secured to a nearby rock. In the video, Sasha unties the dog and carries him to the safety of the shore. Later he gave the dog water and food and transported the adorable pup to Banja Luka Dog Society.

When the puppy’s rescue was posted on social media, outrage as to the person responsible for such a heinous deed, spurred a number of comments hoping to find the responsible culprit. No information has come forward as to the dog’s owner. The good news, however is this precious little guy had no problem finding a home. He is now warm, dry and safe cuddled in his new bed.

(No portion of this story can be reprinted without the permission of the Pet Rescue Report.)