You are here: Home1 / News2 / Dogs3 / dog abuse4 / Dog covered from head to toe in buckshot left on side of road to die 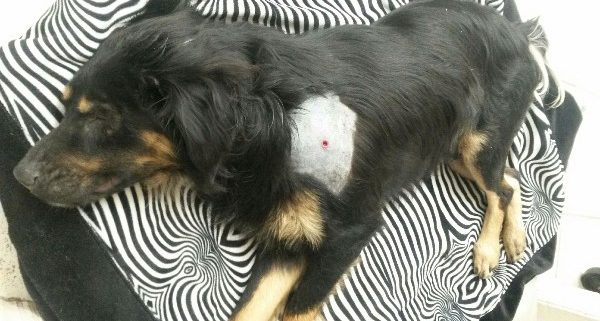 In Tanner, Alabama, a homeless dog found on the side of HIghway 31 late Sunday evening by area residents, is slowly recovering thanks to the rescue organization Peace, Love and Animals. 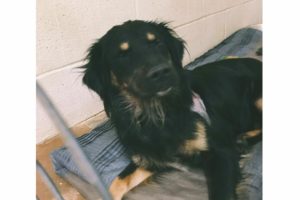 At first it was assumed the dog, dubbed Bobby McGee, had been hit by a car, rescue director Cathy Oakley described on the organization’s Facebook page, but as she bathed the frightened but sweet dog, she noticed a gunshot wound in his shoulder. Radiographs showed a bullet had entered his left shoulder, crossed the spine and lodged itself in the muscle on the right side; it also broke his left shoulder  Tragically there was more – buckshot, too many to count, had covered his body – apparently the dog had been frequently tortured or used as a sick sport.

The dog is also being treated for mange and parasites.  Initial reports stated Bobby McGee would need his front left leg amputated, however for now surgery has been put on the back burner. Wednesday morning’s update on the organization’s Facebook page brought some optimistic news about the adorable dog who continues to win the hearts of everyone  he meets:

“Bobby had a very good visit today. Both ears have cleared up. Skin conditions are improving, but not completely well. Blood work is looking much better. And Bobby is trying hard to impress everyone by showing them that he is starting to walk on his leg some. So for now, surgery has been put on hold to see if Bobby has the will and fate to overcome this and heal. Saving his leg. Keep him in your thoughts and prayers.”

A GoFundMe account to help Bobby McGee with his medical expenses can be found here. Anyone with information about this dog is asked to call 256.233.4343.

Please check out the new Pet Rescue Report website and tell us what you think of our new appearance.