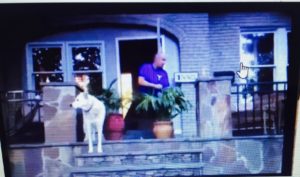 A Facebook video posted on July 4th showing a man igniting fireworks on his front porch in Atlanta, Georgia as the family dog stood within a few feet, has gone viral.

More than 78,000 people have viewed the disturbing video showing the man gingerly tiptoeing around the front porch, preparing fireworks to ignite, while a white dog looks suspiciously at his owner. The dog was apparently much too trusting of his heartless human. And then the man carefully closes the front door. Moments later the first set of fireworks ignite – the dog runs for cover, and as he tries to hide while he whines aloud in fright and confusion, another blast goes off … this time laughter could be heard in the background as if the heart wrenching situation had been viewed as funny by the participants inside the home.

The video, allegedly posted on the Facebook page of Atlanta resident, William Scaffidi has since been removed. An investigation into possible animal cruelty violations has been launched by the Fulton County Animal Services as hundreds of concerned viewers notified authorities. The video continues to capture the ire of thousands of readers. A Facebook page, Animal Lives Matter,who captured a copy of the video before it was deleted, has garnered nearly a thousand comments, with every reader expressing their disgust and anger.

On Wednesday, the owner of the dog was charged with animal cruelty and is alleged to have stated he thought it would be funny. Perhaps even more pathetic is the man’s 13-year-old daughter videoed the intentional cruelty and then posted the horrific act on Facebook. When authorities arrived, the dog was reported to be in good condition, however Fulton Animal County Animal Services will be taking the owner to court – asking for custody of the dog and sentencing the man to jail. Many people have offered to adopt the dog and provide her with a new, loving life. A court date of July 26 has been set.