You are here: Home1 / News2 / animal cruelty3 / Disturbing cruelty as baby bears are trained to perform at the circus
Spread the love
Tweet

Have you ever wondered how animals are trained to perform in circuses, traveling shows and roadside zoos? How often have you seen  bears, monkeys, tigers, lions, dogs and other animals demonstrating amazing feats as  they wave flags, jump through fire hoops and stand erect? Don’t be fooled – those tricks are too often taught by trainers using the most disturbing and torturous acts of animal cruelty. 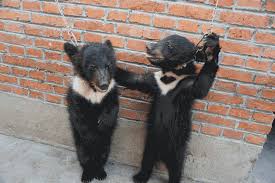 In a recent investigation by People for the Ethical Treatment of Animals (PETA) in Asia, an investigator visited ten training facilities in the city of  Suzhou where more than 300 training places operate for circus animals. Bear cubs are chained to a wall and forced to remain upright on their hind legs for hours; if they drop to all fours they will strangle.

According to experts, forcing the cubs to stand erect can cause permanent joint damage, necrosis or paralysis, and for the rest of their lives, the bears live in excruciating pain. And although the babies often try to reach for each other for comfort, they are yanked, grabbed, beaten and yelled at during the unrelenting cruelty while being trained.

“Some bear cubs were tethered to a hook in the ground by a short rope, making it impossible to move more than a few inches in any direction. Bears were also forced—through violence and intimidation—to jump over objects, walk on their hands, and perform other confusing tricks. As seen in the video, the cubs cried, screamed, grunted, and groaned during training. They repeatedly resisted, but trainers yanked on their neck ropes, dragged them, grabbed them by the fur on their backs, yelled at them, and forced them to continue.” 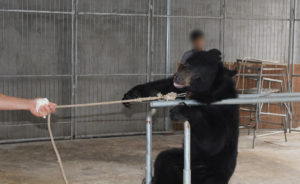 And the abuse continues. Housed in barren and cramped cages, the babies often have their noses pierced with rings and painfully led around forced to perform. A baby bear dubbed Doudou had been witnessed wearing a rope around her neck and forced to walk on parallel bars. If she misbehaved, she was beaten with a stick. 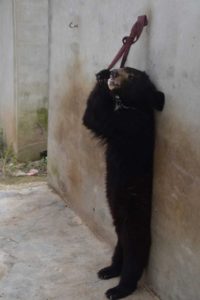 In the complete PETA report, a weak and emaciated lion cub, thought to have been barely a month old already hated the sight of the humans who abused him. The babies are pulled from their mothers at only a few days old; lactating mother dogs are used to nourish the little ones. Even the adult lions and tigers didn’t get any better care. Kept in tiny cages, the only time they were let out was to perform. The PETA report stated: 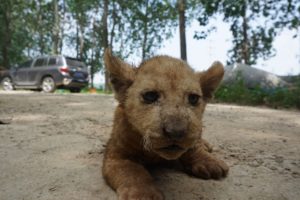 Whatever the species, the circus animals lived in horrendous conditions all linked by severe neglect and abuse. Beaten into submission, often hungry and forced to live solitary lives in the most disturbing conditions, little if anything is done by authorities to stop the abuse. Tourists are reminded not to stop and give money to these roadside torture chambers.

Although conditions might be under better control in the United States, don’t be fooled how Ringling Brothers and other circuses train predatory animals using fear and pain. 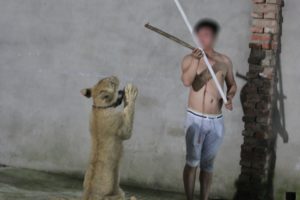 According to Big Cat Rescue , a sanctuary for exotic cats in Florida, many of the rescued cats from circuses have physical and emotional damage having suffered a lifetime of beatings, electric prods and whips.

Every time you pay an admission fee to see a live animal performance, remember some of these haunting photos.

Kingman police K-9 dies from heat exhaustion after search for injured hiker... Abused and neglected senior terrier’s only hope is a rescue angel
Scroll to top