You are here: Home1 / News2 / animal cruelty3 / Thug lured cats to him before brutally kicking them 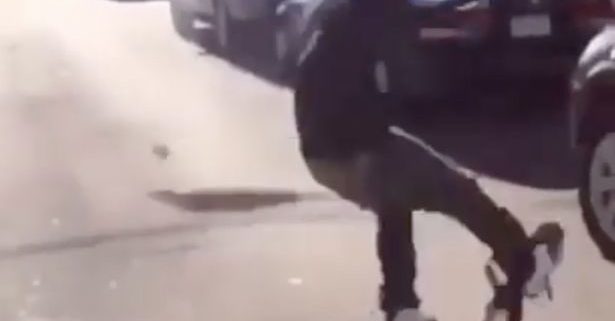 Two young southeast London men have been branded “disgusting” by Internet users, according to the Daily Mail, after the thugs videotaped themselves luring friendly cats over to them and then brutally kicking them. 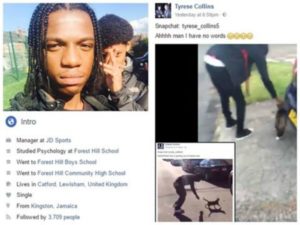 Tyrese Collins, from Catford, posted two disturbing videos to his Facebook page on Monday, which quickly went viral garnering more than 1.5 million views with comments labeling the deed  “disgusting.” It is not known if Collins participated in the egregious animal abuse.

The video shows  a man dressed in dark clothing luring a cat over as if to pet it. He is shown bending over, as if greeting the friendly feline, but seconds later he brutally kicks the cat into the air – the defenseless animal lands out of sight somewhere behind a parked car. And then came a second disturbing video with the same horrible deed  happening again. Collins labeled the video:

“Nahhhhh this is getting out of hands now.”

On the Facebook page of Pet Abuse UK, more than 1700 criticized  Collins and posted the following:

“A feral youth named Tyrese Collins of Catford, London, finds cruelty to cats so entertaining, he’s uploaded two Snapchat videos of either himself or an associate violently kicking two of them. The fate of his defenseless victims is unknown, but one of the cats is tiny and he kicks her with such force that it’s hard to imagine she escaped with anything less than fatal injuries.”

As to the other cat, who could be seen as friendly and sweet, it is suspected she hit the car after she was kicked. 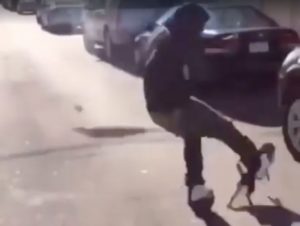 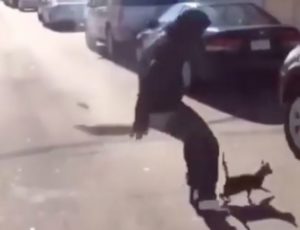 “She too would’ve suffered great pain and distress. This is just the latest in a seemingly endless procession of attacks on helpless cats,” continued the Pet Abuse UK moderator.

The RSPCA is currently investigating. Anyone with information is asked to call 0300 123 4999.