Why someone would stoop so low as to steal a dog’s wheelchair from a porch in Long Beach, Washington is not known; poor Charley the dog cannot walk without his “wheels,” reports AbcNews.

Charley lost his mobility according to owners, Rod Beauregard and Leona Wolf. Rod has no idea why anyone would do that, except for one thought.

“It has BMX wheels on it. Someone could put it on a bike. They’re going to throw the other piece away probably,” Ron stated.

Last year, their Labrador retriever ruptured a disc in his back leaving him unable to move his hind legs. The wheelchair was a life saver for the sweet dog.

“He’ll try to sit up and he doesn’t understand why he can’t get in his chair,” Rod said about Charley. “He can’t walk now, he can’t run for his ball, he can’t get up, he can’t stand up, and he’s sad about it,” 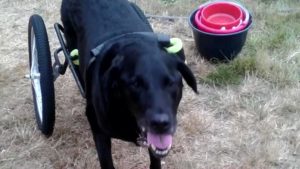 By Tuesday, a friend of the family established a GoFundMe account to raise money to buy Charley a new wheelchair.

“I would love to be able to help him replace the custom made wheelchair for his best friend,” had been posted on the fundraiser.

A goal of $585 was set, and within hours, the collected funds had already doubled. On Thursday morning, Charley’s new wheels were on the way.

And to the heartless person who stole Charley’s chair and its ramp – may fate pay you back one day for this despicable deed with everything you deserve.