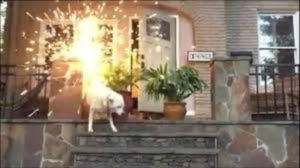 An Atlanta, Georgia man charged with animal cruelty after a Facebook video posted by his teenage daughter went viral over social media on July 4th, denies that setting off fireworks near his dog had been a prank, reports Fox News.

William Scaffidi, the owner of a rescued four-year-old Husky, named Betty Boop, was videoed setting up fireworks on his front porch as he gingerly tiptoed around as the dog. Although the dog looked suspiciously at him, she did not realize what  was about to happen. Speaking to news media however, Scaffidi stated,

“The thing is, is that it wasn’t even a prank. I didn’t even know the dog was there.”

Animal advocates question Scaffidi’s statement about not being aware the dog was on the porch; most people saying he  placed the plants on the porch to trap the dog. Even looking at the video, it appears as if Scaffidi stares at the dog, and when he finished setting up the fireworks to ignite, he quietly tiptoed back into the house – even as he made direct eye contact with Betty Boop.

The entire distressing event was recorded by Scaffidi’s 13-year-old daughter as the dog reacted in panic  when the fireworks exploded. Laughter could be heard in the background.

Fulton County Animal Services visited  Scaffidi’s home amid hundreds of complaints and phone calls to authorities about the distressing situation. Scaffidi has been charged with animal cruelty and for not having a license for his dog. A court date has been set  for later in the month.