You are here: Home1 / News2 / Dogs3 / Dog health4 / Deformity: Dog’s legs go up, instead of down
Spread the love
Tweet

A young golden retriever named “Rexi,” is unlike most any dog anyone has ever seen. The one-year-old dog has two front legs that go up, instead of down. Rexi belongs to James Cassity and Rachael Woertink, of Victorville, California. 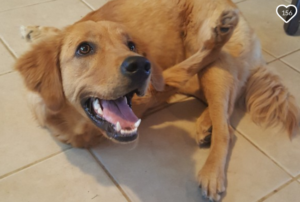 According to Friday’s ABC 7 News, the couple first noticed that Rexi was different when the pup was just 10-weeks-old. Rexi was taken to a veterinarian who determined that the pup was suffering from a neurological problem…the couple was advised that they might want to consider having their puppy euthanized.

Fortunately for Rexi, her owners feel like she is family and they could not bear the thought of having her killed. Rexi currently has a wheelchair, but it flips over if a wheel hits a rock.

Though Rexi has learned to get around quite well on her own, Woertink and Cassity hope to find a better option for her…something that increases her mobility without the risk of injury.

In an effort to find the best solution, the couple created a GoFundMe fundraiser which reads, “Rexi has no use of her front legs. We would like some help to make her mobile again or better yet fix her legs if possible. We love her very much and just want the best for her.”

Many people have offered helpful suggestions on the fundraiser site, and nearly $5,000 has been raised to help get Rexi the help that she needs. Until a good solution is found, the couple will continue to enjoy their unique pup, and do what they can to keep her happy, and healthy. Cassity told ABC 7, “It wasn’t her fault she was born that way, so just trying to find something to fix her,”