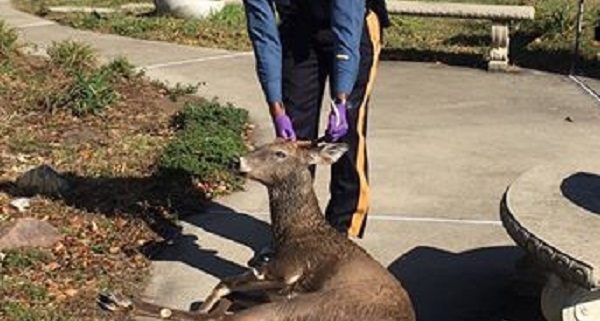 If not for the quick thinking of a New Jersey State Trooper, a deer who wound up in a swimming pool on Friday likely would have drowned. On Sunday morning, the Facebook page for the New Jersey State Police recounted the heroics which saved the struggling deer.

The man responsible for saving the buck’s life is Trooper Dwayne Phillips – according to the New Jersey State Police, Trooper Phillips was called out on Friday afternoon to a home in Harmony Township, Warren County, to help with a deer found drowning in a pool.

The State Police stated, “When Trooper Phillips arrived, it was clear that the buck had been struggling for quite some time.” Though Trooper Phillips had no specific training for rescuing a drowning deer, he showed no fear and opted to grab the bull (or rather buck) by the horns (or rack) and pull him out of the water.

The buck was exhausted from the ordeal, but he eventually recovered and was able to run away.

The most rewarding thing that we can do as troopers is to save a life, human or animal.

Ex-correctional officer sentenced to two days in jail for death of K-9 part...