A frightened little seal used some unusual ingenuity on Monday to escape from becoming a Monday morsel for killer whales off of Vancouver Island on Canada’s Pacific Coast. 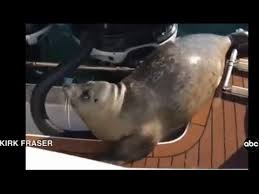 According to Fox13News, the feisty seal jumped aboard a tour boat as a pod of orcas circled around looking for food. Nick Templeman, the boat captain running the Campbell River Whale and Bear Excursions, videoed the amazing event as the seal showed little fear of the humans as he inched his way to safety near the outboard motor of the boat.

“Once he got a look at the boat, he made a straight beeline for us,” stated Templeman. “We had four or five orcas all at once sitting at the back of the boat straight up and down sort of looking at the seal. They would dive and they would all disappear — about 12 of them — and you can see shape after shape trying to come up from under the boat.”

At first the seal seemed scared of the humans, and he jumped off and back onto the boat a few times. One can only surmise the seal figured out he was safer with the humans than the multiple groups of whales searching for him. The men on the boat feared the whales would tip over the boat to get to the seal, but decided not to kick the little guy off and did say he deserved to live.

After about 30 minutes, the whales gave up on their hunt and moved off. The seal stayed for awhile – cautiously surveyed the ocean and swam away.  Kirk Fraser posted the YouTube video which has garnered more than 1.4 views since Monday. He had this to report:

“We were out with the family looking for whales and a pod of 12 transient killer whales where chasing the seal. It ripped towards the boat in a desperate escape and scrambled on the deck. It fell off three times in panic and finally stayed on until the whales gave up after about 30-45 minutes. Most intense epic experience ever. Love you Nature. What a lucky seal”

Check out the video. Caution: Offensive language (Photo by YouTube via ABC News)