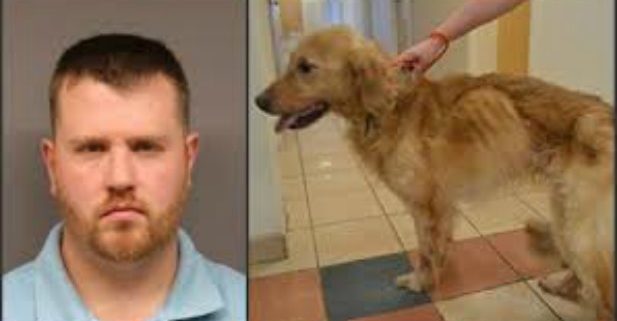 In Coventry, Rhode Island, a man turned himself in on Thursday after allegedly abandoning and starving his Golden Retriever, reports Abc6News.

Sean O’Leary, 33, has been charged with unnecessary cruelty to animals for failing to feed the dog as well as not providing the dog with adequate living conditions. In addition, O’Leary was charged with failing to vaccinate the dog against rabies.

The incident was reported to authorities on Saturday, September 3rd, after having received a complaint about a Golden Retriever in distress. The dog, ironically named Lucky, “appeared severely malnourished” stated the police report as officers arrived at O’Leary’s home. Neighbors told police O’Leary had been away from the home for weeks.

Lucky was transported to an area animal hospital where he has been treated for dehydration and starvation. He is currently in the care of Animal Control where he is reported to be slowly recuperating. If interested in adopting Lucky, please contact the Coventry Animal Control at 401.822.9106.