In Box Elder, South Dakota, a couple left their small terrier out into their yard last Friday while they left for a  quick trip to run an errand, reports KotaTelevisionNews. 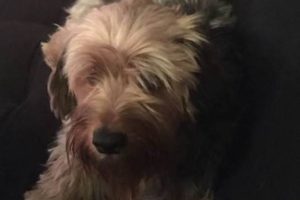 When Cathy Jacques and her husband returned home, their little pooch, named Buddy was no where to be found. The couple searched for hours up and down the street where they lived and around the entire neighborhood; Buddy was gone. As a last resort, they stopped by a dumpster and picked up the heavy lid.

“Little Buddy’s front paws had been taped together, his back paws were taped together; his mouth was taped shut and he was stuffed inside of a garbage bag and it was tied shut,” stated Cathy. “His whole face was drenched. I think it was from him panting, and the condensation inside of the bag.” 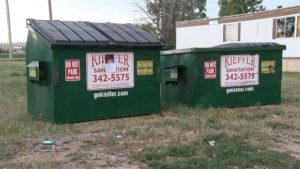 The temperature outdoors on Friday had exceeded 90 degrees. Little Buddy was lucky to be alive. The family had to shave off the pup’s coat because of the stuck tape. The pink collar the dog had been wearing was missing, and Cathy thinks whoever did this to her dog kept the collar as a souvenir.

“What could a sweet puppy do that it would deserve that? If they had a problem with my dog, they could’ve just came to me and said something,” said Cathy.

And now Buddy will no longer be allowed outdoors by himself ever again, and their home has a 24-hour surveillance camera just to make sure the family and Buddy are safe. Fortunately Buddy is recovering and seems to be doing well emotionally. He is still playful and friendly. Anyone with information is asked to contact the Box Elder Police Department at   605-394-2151. Cathy is offering a $100 reward leading to the arrest and conviction of the person responsible for the cruelty.