In Ionia County, Michigan, a couple has filed a last chance appeal to save three family dogs who were ordered to be euthanized this week by a judge after being deemed dangerous, reports Fox17News. 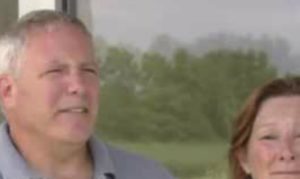 The dogs, two pit bull mixes named Mario and Luigi belong to Byron and Susan Vanvakias’ son-in-law, Allen Hustin. The dogs are Wounded Warrior comfort animals and were provided to Allen to help the Purple Heart recipient with his Post Traumatic Stress Disorder after having served three Iraq tours for our country. The third dog ordered to his death is a three-year-old German shepherd named Major.

In early July, the Vanvakias’ had been caring for the three dogs when they escaped from their yard. Everyone in the neighborhood searched for the dogs, and the next day the dogs had been captured by a local farmer and confined in a pen. That’s when the problems began – also found were three dead goats and a family cat which all belonged to the farmer. Although the family stated the dogs did not kill the goats or the cats, Byron and Susan were issued tickets and ordered to appear in court.

Unfortunately the dog owners had no idea how serious the charges were and had expected the court appearance to have been a civil case by the farmer suing for damages to his stock. That turned out not to be the case, and the trial ended with the dogs being labeled as dangerous and ordered to be killed as prosecutors claimed a “preponderance of evidence” against the dogs.

According to the Vanvakias family, there was far more to the story proving the dogs happened to be in the wrong place at the wrong time.

“There was no blood – not a trace of blood on any one of those dogs,” stated Byron. “Those goats were completely bloated, covered in flies, and it had been obvious that they had been dead for quite some time. It would have been obvious they did it – if they’d have been covered in blood – I would have accepted the fate. I just don’t want to  … let them die for no cause.”

Watch the YouTube video and make your own decision: