You are here: Home1 / News2 / Dogs3 / dog abuse4 / Couple abandons dog and puppies after being evicted from apartment 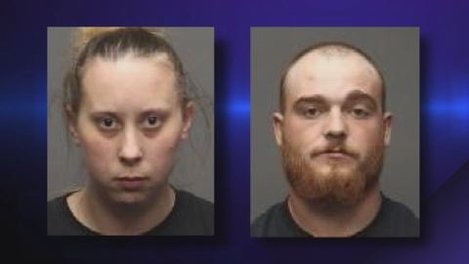 In North Norwich, New York, a couple faces animal cruelty charges for abandoning their Beagle and her three puppies, reports the Binghamton Homepage.

Arrested by the New York State Police on Sunday, were Brittany Waldruff, 26, and Derrick Waldruff, 24, after the Norwich Dog Control Officer responded to a call about abandoned dogs in a home off of State Route 12. The dogs were left in an upstairs locked apartment without food or water after the couple were evicted. When discovered, the six-week-old puppies as well as their mother were dehydrated.

The couple have been charged with four counts of misdemeanor cruelty to animals and are scheduled to appear in court on September 14.

The dogs are now all in the care of Compassionate Care Veterinary in Norwich. According to the veterinarian staff, two of the puppies and their mother will be available for adoption in a few weeks. To help with their expenses, donations can be made to the “Angel Fund” in care of M&T Bank, 118 NY Route 320, Norwich, New York.

Emaciated, gentle soul cowered behind a trash can in an attempt to hide
Scroll to top