You are here: Home1 / News2 / Dogs3 / Celebrity speaks out after adopted dog found malnourished and wanderin... 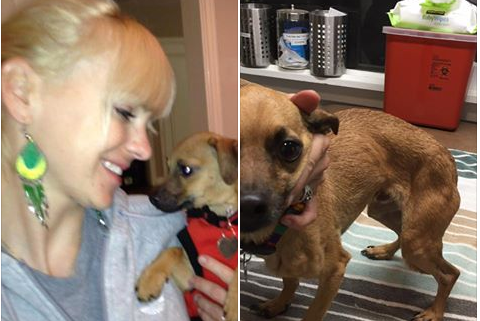 Celebrity Anna Faris is speaking out after a dog that she adopted five years ago was recently found malnourished, and wandering on the street. According to Tuesday’s publication of People, Faris has acknowledged that she adopted the now five-year-old Chihuahua, named “Pete,”years ago from the Los Angeles based rescue agency, Kinder4rescue, but admitted that she gave Pete away.

Faris explained, “Unfortunately when our son was born, we discovered that he was allergic to Pete, so I found what I thought was a loving and responsible family to care for him.” Faris knows that she was supposed to notify the rescue agency that she wanted to rehome the dog, but she failed to do so and she now regrets that decision.

Faris thought that the family she gave Pete to was responsible and loving…she now sees that she made a mistake, and admitted that giving a pet away for free can be dangerous. Pete is currently in the care of Kinder4rescue.

Prior story about this situation here.