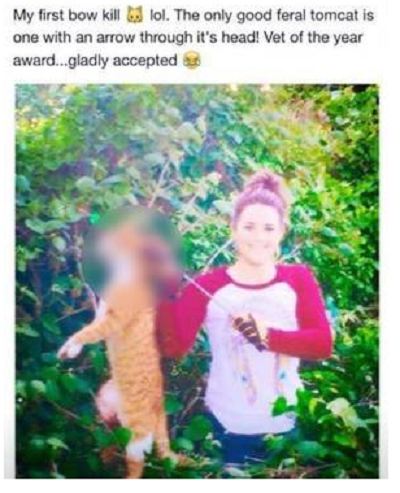 The Texas veterinarian who gained notoriety for killing a cat with a bow and arrow, is once again garnering unfavorable press after being charged with driving under the influence, reported Monday’s KHOU News.  The maligned veterinarian, 33-year-old Kristen Lindsey, was charged after allegedly nearly hitting an off-duty police deputy earlier this year in Harris County while driving impaired.

Lindsey lost her job at the Washington Animal Clinic after bragging on Facebook about killing a cat in April 2015 – the damning post read:

“My first bow kill LOL. The only good feral tomcat is one with an arrow through its head! Vet of the year award … gladly accepted.”

Though Lindsey’s veterinary license is still active, she is not fully in the clear from the Texas Board of Veterinary Medical Examiners. Lindsey did not face criminal repercussions from the incident which claimed the cat’s life.

A hearing for the driving while impaired charge, which resulted from an incident in March, will take place later this week – the charge could be enough to result in the suspension of Lindsey’s license.