You are here: Home1 / News2 / Cats3 / Cat frozen in ice saved from beneath a train

A cat, frozen in ice and snow, was recently saved from beneath a train by a conductor in Canada. According to CBC News,  conductor Brad Slater, a Canadian National Railway employee, heard pitiful cries early Sunday morning, and when he went to investigate, he found the tabby frozen in the ice and snow beneath the train.

The cold cat was plucked out of the bitter cold and wrapped into a t-shirt. With the help of train engineer William Munsey, the chilled feline was able to warm up inside of the train – safely out of the frigid weather outdoors. Munsey told CBC News how the cat quickly settled in for the journey, and how he seemed to know which man had saved him, “Within five hours it was curled up on his lap … he was pushing his face against Brad’s arm. It was almost as if it knew how close it had been to dying and knew exactly which human had saved it.” 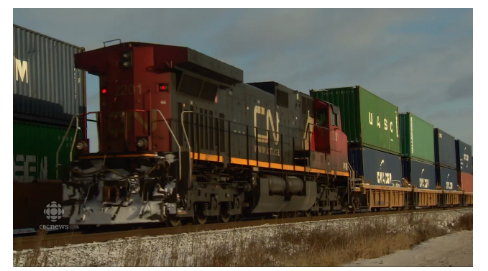 Slater dubbed the rescued cat Q199 (for the train’s number) and welcomed him into his home, but the cat may not be staying. A couple, who believes that Q199 may actually be their cat, “Tiger,” has come forward after seeing the media coverage of the heartwarming feline rescue. The couple, Brent Hahn and his wife Lynn Hahn, have retired from jobs with the Canadian National Railway and they told Slater that they adopted Tiger back in 2012.

The couple plans to meet up with Slater to determine if “Q” is actually their missing cat.

SPCA plans to put down family’s dog – agency fighting for his l...
Scroll to top