You are here: Home1 / News2 / animal cruelty3 / Calf tortured with darts as part of bullfighting tradition in Spain
Spread the love
Tweet 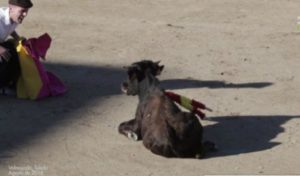 A video of a young calf being tortured during a Spanish bullfighting festival in the town of Castilla-LaMancha has gone viral as animal advocates revile in disgust as participants stab to death the defenseless and crying animal with darts in the “name of fun,” reports The Local.

The calf, apparently not even weaned from its mother, lies in the middle of the bullfighting ring  and is tortured as the audience cheers and claps. The calf, unable to defend himself and pitifully crying in pain and fright, was videoed by animal welfare group, Pacma. When the calf was killed as part of the town’s summer celebrations, the audience cheered.

“I’ve never seen such cruelty inflicted on an animal in the name of fun,” stated the president of Pacma, Silvia Barquero.

Soraya Sry: “What a horror… this can only enjoy a psychopath with no guts to give free rein to all its evil. I hope you find the same death that these poor innocent babies in your hands of murderers. Ugh.”

Marian Mauri: “This is a disgrace, an insult to the ones we love and respect life. Enzañarse with babies is more than criminal. These people are despicable. Not even worth the air they breathe. Are poison.”

In a petition to permanently stop the torturous tradition, Pacma states:

“Thousands of popular taurine festivals, such as that of Valmojado, are tainting the image of Spain, coverting it into a symbol of animal cruelty across Europe.”

Bullfighting has become a distinctively controversial tradition as Spain garners worldwide criticism in a struggle between what used to be and animal rights’ groups protesting the  inhumane treatment. On September 10, a demonstration, expecting crowds of thousands will be held in the “largest anti-bullfighting march ever held in Spain.”

In July, the death of Spanish matador, Victor Barrio, in the bullfighting ring sparked more interest to ban the bloody sport. As the bullfight was aired live on television, spectators gasped as the 1200-pound bull gored Barrio puncturing the man’s lung and aorta. The video went viral, and while Barrio’s wife tweeted about the death of her husband as being “unfair” and how he died in “glory,” a torrent of criticism flooded in, aimed at the entire tradition showing little compassion for Barrio’s untimely death. Comments such as, “Life was fair. Your husband got what he deserved,” sent shivers through everyone’s spines demonstrating the extremely strong feelings expressed on both sides of the cruel and dangerous sport.

In the 21st century, most people find it hard to comprehend how torturing any animal for sport can be viewed as a “tradition” or a cultural event.