You are here: Home1 / News2 / Dogs3 / dog news4 / Boxer adopts orphaned bird after it fell out of its nest
Spread the love
Tweet

In Kent, England, a woman’s rather adorable but goofy Boxer has developed a bond with an orphaned bird that fell out of tree in the garden of his home. 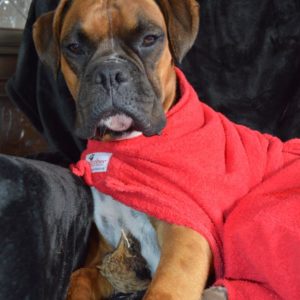 On a Facebook page called Rusty the Gentle Giant, the dog’s owner Jurgita Peciulaityte, recounts the bond the bird named “Birdie” and Rusty have forged together. The pair have become inseparable since the day Rusty found the tiny bird while Jurgita had been in her woodworking shop.

“I heard him barking excitedly like he had found a cat, and discovered he was looking at this little bird which had fallen out of its nest,” described Jurgita to the KentOnline. “As soon as I approached, the bird opened its beak so I found some earthworms which it gobbled down.” 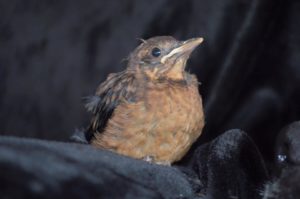 Although Birdie is too young to fly, it hops onto Rusty’s back when the dog is lying down. And when Rusty stands up to see if Birdie is on his back, the happy-go-lucky pooch goes round and round. 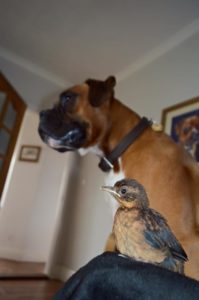 “Rusty is very gentle and caring and doing a great job,” describes Jurgita, “but he is no help with digging for worms. He will be one sad puppy when the birdie flies the nest.”

Sadly all of Birdie’s brothers and sisters had flown away, and there had been no sign of the mother, but that doesn’t seem to be a problem. Day#9 of Birdie’s and Rusty’s friendship included:

“We practice going outside, perching up on different things and a bit more flying 🙂. Hope that Birdie will memorize the route to our porch, and if he needs food after leaving he will find some in there, left special for him.  As alway Rusty keeps a close eye on him 🙂 xx” 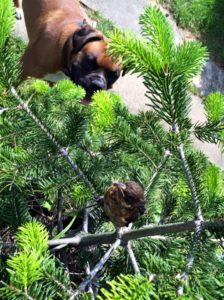 Stay tuned as Birdie gets ready to fly.

Puppy thrown away in trash can outside of shelter Deformity: Dog’s legs go up, instead of down
Scroll to top