When police officers arrived at a McLellan Street home in Dochester on Wednesday night, they found a 10-month-old Mastiff mix puppy suffering from a gunshot wound, reports the Boston Herald. 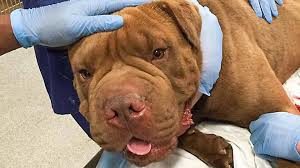 Officers David Lanteigne and Brian Smith were told by the dog’s owner, that his 90 pound pooch named Fellony had stood in front to protect him, while an assailant tried to shoot the man. During a press conference on Thursday, Fellony’s brave plight was discussed:

“He was limping, and you could tell that he had obvious signs of distress. He was panting, drooling. He was  possibly in shock, but he was with it,” stated Officer Lanteigne.

The officers and First Response teams drove the owner and Fellony to the MSPCA’s Angell Animal Medical Center for treatment. There they discovered the dog’s owner did not have the funds to pay for his dog’s care. And that’s when the police officers all got together and used one of their credit cards to secure payment for the more than $2,500 vet bill and surgery needed for Fellony’s survival.

“It’s just a natural human response to somebody in need and help them out with their family, and dogs are family, and I don’t think they get the credit they deserve sometimes. The way that I look at it, that dog put himself in front of his owner and took a bullet for him,” stated Lanteigne.

Lanteigne happens to have a real soft spot for dogs. When his mother fainted one day back in May 2012 and fell onto the railroad tracks, her adopted pit bull dog named Lilly dragged the woman to safety – as observed by the train engineer. Lilly was severely injured, but with donations and support from around the country, the dog has since recovered and continues to be the inspiration for other dogs in dire need of rescue. Since then a non-profit group called Lilly the Hero Pit Bull continues to raise funds for dogs in need.

“Lilly the Hero Pit BullTHANK YOU GUYS!! You’re so amazing! Hopefully we will get enough to cover the full bill and enough to maybe buy this fellow a new bed and a couple toys! If we have additional we will ask your permission for the extra to go to another dog in need.”