In an appalling act of animal cruelty, bodybuilder Josh Bowmar, equipped with a GoPro camera to his hunting gear, videoed how he lured a black bear to his death, stabbed it with his homemade seven-foot spear and then left the animal to die an excruciatingly painful death – experts agree could have lasted up to 20 hours, reports the Mirror. 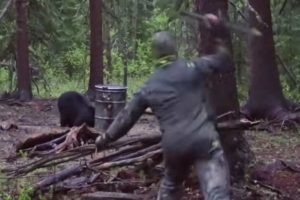 In canned hunts, bears are frequently drawn to hunters after plastic barrels filled with beaver tails, honey, bacon, doughnuts and maple syrup are left near hunting sites as the bears wake up hungry after their winter’s hibernation. At first Bowmar claimed the hunt was an ethical kill, but animal rights groups soon described Bowmar as killing the animal for “pure selfish bloodlust.”

In Alberta, Canada, Bowmar uploaded the disgusting act to his YouTube channel showing the moment the bear was stabbed with the spear as it impaled the animal’s body, hit a tree and the grievously injured animal ran away. The bear’s body was not found until the next day; the video showing the damage done to the bear’s internal organs as the All American javelin thrower aimed it into the bear’s chest. 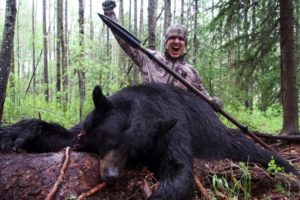 “I just speared a bear. I’ve worked so hard… I drilled him perfect. He’s going down. That was the longest throw I thought would ever make it,” bragged Bowmar.

And when he found the bear’s body and proudly held it up as the animal’s intestines fell outside of its finally dead body, Bowmar’s sick babble continued:

“That my friends is a lot of penetration. You see it is a big, big blade…I made this homemade grip of rope and super glue.”

Sickening self praises in the video by Bowmar added to the disgust of the poor animal’s deliberate slaughter:

“I just did something I don’t think anybody in the world has ever done.”

Even seasoned hunters have ridiculed Bowmar’s disgusting display of animal cruelty and downright inhumane treatment and disrespect of wild animals – one hunter calling Bowmar a “mindless jackass.” The kill is said to have taken place in May, one day after his wife, Sarah shot another bear with a bow. (Sarah was a former vegetarian.) The couple bragged they loved traveling and hunting big game with bow and arrow.

On Thursday, Sarah, who previously had been a brand ambassador for Under Armour, the firm’s “first ever women’s hunting campaign” was dropped; the company stating they did not want to be associated with Bowmar’s hunting method. In the bear’s slaughter, both Sarah and her husband, who live in Columbus, Ohio, were filmed wearing Under Armour clothing.

A spokeswoman for Under Armor told the Mirror: “

“Under Armour is ending its relationship with Sarah Bowmar, The method used to harvest this animal was reckless, and we do not condone it. Under Armour is dedicated to the hunting community and supports hunting that is conducted in compliance with applicable federal, state and local laws and hunting practices that ensure a responsible and safe harvest of the animal.”

It is not known if Canadian authorities will try to extradite Josh Bowmar about the killing. Since this horrendous incident, Canada has banned “archaic” spear hunting.

Rest in peace poor bear. You didn’t deserve the despicable act that brutally ended your life. Follow the National Pet Rescue on Facebook.