In a cruel and disturbing video, a Baylor University Bears’ wide receiver football player was captured on Snapchat abusing his dog for having had an accident in the house, reports the USAToday. 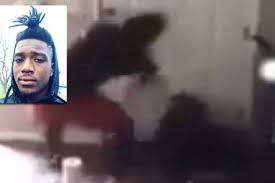 Ishamel Zamora, a Houston native, is shown repeatedly hitting his dog in the video. He kicked and hit the dog with a belt while the dog howled aloud and cowered in pain in the corner of the room. In one part of the video, Zamora curses at the dog. The video was posted by another team member, however it has since been removed.

Originally filmed in June, the video just surfaced and was released by KxxvNews.  A former Baylor student, Shelby Ball, said she knew she had to do something as soon as she saw the video and immediately headed to authorities.

Zamora has been charged with a Class C misdemeanor for animal cruelty and admitted to having lost his temper. He faces the maximum of a $500 fine.  He has since been taking instructions from a dog trainer to help him with his dog’s training, however according to police, the dog is living with Zamora’s parents in Houston.

A statement by Baylor’s  Coach Jim Grobe included there would be sanctions against the player by the school, and although he is still practicing, there have been no notes as to how many games Zamora will miss. Note the tone of the coach’s statement about how Zamora ‘spanked’ the dog, and then watch the video.

“Hopefully it’s a teaching moment and a learning experience for him, and I think he was frustrated and spanked the dog for not being house trained. But you can’t do that and he knows that. He loves the dogs and takes great care of the dog other than losing his temper with the dog, I think he takes great care of him.”

Animal rescue groups continue to express their disapproval of the school’s handling of the situation. Photo via YouTube.

Warning: Disturbing video. May not be suitable for all audiences:

Injured senior German shepherd, abandoned at vet, out of time Family dog dies after chemicals burn his body while at pet groomer
Scroll to top