UPDATE: According to the Bastrop Police Department one hour ago, the men have been arrested. They have been each charged with one count of animal cruelty and one count of conspiracy. Both Sadler and Stanley have been booked into the Morehouse Parish Jail.

In Bastrop, Louisiana, authorities continue to search for two men accused of slitting a dog’s throat and then posting the video on Snapchat for all the world to see before someone else shared the despicable deed on Facebook. 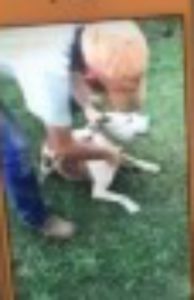 According to KnoeNews, authorities were called to the Bastrop Louisiana Killpen on Wednesday to question Steven Sadler and Boots Stanley. The two men were scheduled to meet police officers at the auction site to turn themselves in, however neither man ever appeared. The owner of the auction, Mitchell Stanley denied any knowledge of the video, and stated he didn’t know either man even though one man shared the same last name. 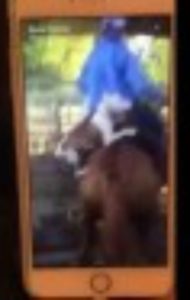 The extremely disturbing video shows one of the men accompanied by a dog wearing a collar with a rope around its neck. In the video, the dog is seen on the back of a horse holding on for its life, and later the trusting dog’s throat is slashed. Police in both Arkansas and Louisiana are searching for Stanley and Sadler. They face Class D felony aggravated cruelty to animals charges.

The photos and video were shared to the Facebook page of Hanna Gospin with the following comments:

“… screenshots from a Snapchat story posted by BOOTS STANLEY AND STEVEN SADLER from ARKANSAS. In the video it shows these boys torturing a dog by tying it on the back of a horse while the dog hangs on for dear life. The next clip is of a boy slicing the dog’s throat. It was real; there was blood, and you can hear the dog suffocating.”

Video is extremely graphic and may not be suitable for all viewing audiences.

Video and screenshots via Hanna Gospin