You are here: Home1 / News2 / Dogs3 / dog rescue4 / Arizona volunteer sits in dog’s kennel for 26 hours until pooch is...
Spread the love
Tweet

In Phoenix, Arizona, Whitney Steele, the Arizona Animal Welfare League and SPCA director of volunteer services and special events, stayed in the cage of a four-year-old dog that had been living at the shelter since April. 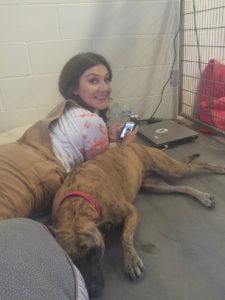 According to the Facebook page of the organization, Lana, a four-year-old bullmastiff mix had been found as a stray when she was just a puppy. Not long after, she was adopted by a family and for three years lived a happy life until she was returned nearly four months ago. Sadly, Lana was not doing well at the shelter, and that’s when Whitney decided to bring Lana’s plight to social media. 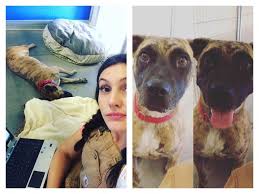 And so Whitney decided to live in the shelter cage with Lana for as long as it would take until someone came to  adopt the dog. A sign soon appeared on the outside of Lana’s kennel:

“Lana is always overlooked and has been at the shelter for more than 125 days;( I am staging a sit-in and living 24/7 in her kennel until she gets adopted! Please consider getting to know this sweet girl! Oh, my name is Whitney and I don’t need treats!”

Whitney spent the night in Lana’s kennel; perhaps a small insight into how Lana feels locked up. The only time Whitney came out was when Lana was walked for exercise and her bathroom breaks. The two ate pizza, watched net flicks on Whitney’s laptop and even conducted meetings from the kennel.

The good news for Lana and Whitney came on Friday afternoon. The organization announced Lana had been adopted. Barb Kerstetter saw Lana’s story and just knew this was the right pooch for her after having lost her dog over a year ago. 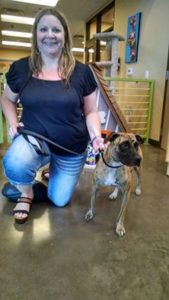 “When I saw the story and saw that she’d been here for four months, I knew she was for me,” Kerstetter stated.

There are lots more very cool dogs waiting for their new families to meet them. Give it a try and find your new best friend. Click here to see some of the most awesome dogs and cats.