The adorable pit bull puppy named Rocco, whose ultimate fate teetered near the edge of euthanasia because his owner didn’t have the $130 to register her “harmless” dog under the rules of the 1991 Dangerous Dog Act, will not face death, reports the GazetteLiveUk on Monday. 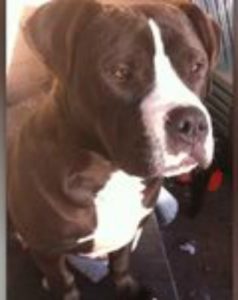 Victoria Dismore, 22, the owner of the dog was given a deadline to come up with the money needed to register Rocco as required by law, after she told the judge on Friday she didn’t have the money as she had been saving up to buy her young children shoes they needed. Regardless, Dismore said she would take out a loan to save her dog and return the playful and affectionate pooch back to her young children.

More than 50 people came to Rocco’s aid; Victoria was overwhelmed with the love shown towards her family and her dog stating:

“I just want to say a big thanks to everyone. There were people offering to pay the full amount and then there were others willing to chip in. I’ve had over 50 offers so far and everyone has been so kind, but I’ve sorted it out so Rocco won’t be put down. I can’t believe the response I’ve received, but there are so many people out there in the same position as me.”

Petitions asking for the softening of the 1991 Dangerous Dogs Act continue to be circulated and have garnered thousands of signatures. Sadly, Rocco is still not free; even dogs considered “harmless and not a threat to society” are required to wear a muzzle, are not allowed off leash and must be neutered. For now, Victoria will be sending Rocco’s registration form to the required government officials and is looking forward to reuniting the pup with her four-year-old son.

Read more about this story here.