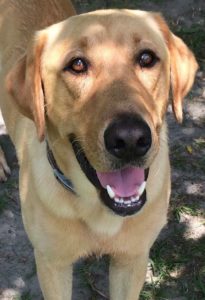 According to Friday’s WYFF 4 News, a reward has been offered for information leading to the arrest and conviction of whoever cut off a dog’s penis. The dog, a yellow Labrador retriever named “Major Payne,” was attacked and maimed after he jumped a fence and escaped from his yard on Winterberry Drive in Andrews, South Carolina, on June 9.

Elizabeth Byrdic, one of the dog’s owners, has been utilizing social media to keep people updated about the dog’s injuries, and to help find whoever is responsible. On July 5, Byrdic wrote, “$500.00 REWARD for information leading to the arrest and conviction of the person or persons who attacked Major Payne Byrdic on June 9th, 2016 in the Big Dam community of Andrews, S.C. in the vicinity of Winterberry Drive. His penis was cut off and he was severely beaten in his belly.”

The dog has undergone surgery for his injury and he is learning how to function with his altered body. Anyone with information about this animal cruelty case is asked to reach out to the  Georgetown County Sheriff’s Office at (843) 546-5102.