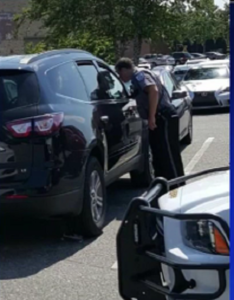 Eventually, the owner returned to the car, and the pup – though the individual was advised to take the pit bull puppy to a veterinarian for an exam, there was no other ramifications for leaving the young dog inside of the car for over two hours on a hot afternoon.

Miller documented the situation with photos and then posted them on Facebook – it did not take long for the Durham County Sheriff’s Office to be inundated by angry people who were stunned about what happened. Shortly after seeing the outpouring of concern from people, the sheriff’s office announced a change of policy for dogs found inside of parked cars:

Effective immediately, the deputies responding to calls for animals left in unattended vehicles will continue to assess whether the pet is in distress and make every attempt to locate the pet’s owner in accordance with North Carolina law. However, Durham County deputies are no longer required to wait for visible signs of distress. Under the revised policy, deputies will document the interior and exterior temperatures of a vehicle at least twice. The deputy will use his or her discretion in determining whether the animal should be removed from the vehicle. If the animal is removed, the deputy will decide whether to return the pet to its owner or pursue criminal charges after taking the animal to the local shelter.”

The Durham County Sheriff’s Office is still fielding negative feedback from individuals who are posting on their Facebook page – the response to angry comments is a simple, “Thanks for your feedback. Have a great day!” 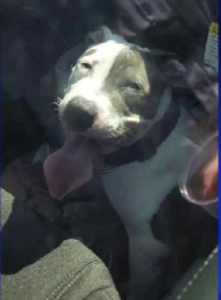