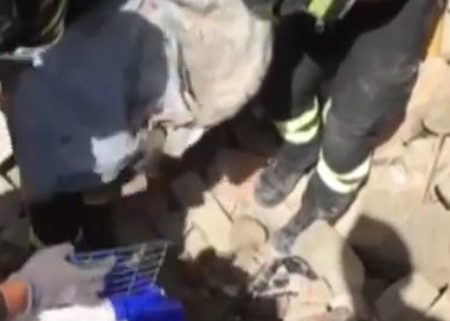 When firefighters heard a very faint meow, that cry became a cat’s defining moment after being discovered buried under rubble in the devastating Italian earthquake.  According to TheLocalIt, who knows how many of his nine lives, Pietro the cat, used up as he was carefully pulled out of the ruins of a collapsed home as firefighters searched for the personal belongings of the homeowners? 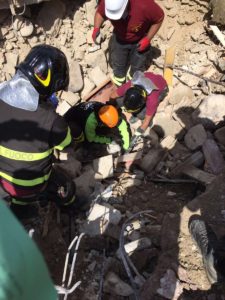 The  attached video shows the firefighter sifting through the rubble and finding the cat’s head. It took a few moments to free Pietro’s body, but the cat can be seen turning his head from side to side checking out how fortunate he was that these brave firefighters saved his life.

“He’s hurt, but alive. He’s called Pietro,” stated Italian animal protection agency ENPA, which has assisted in caring for the lucky cat and hundreds of other pets found since the earthquake.

And it seems this lucky feline survived only on rain water, since he had no food and even a limited air supply. Emergency crews rushed Pietro to an area animal veterinarian. Initial x-rays indicate Pietro suffers from a fractured jaw. His condition continues to be monitored until he is strong enough to undergo surgery to repair his jaw. 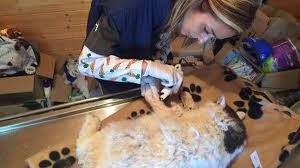 The cat’s family had given up on finding him alive; imagine their surprise and good fortune.

A day earlier, another cat was pulled from the rubble in the town of Accumuli; she had been buried for 14 days. In the video, the men are calling for the cat “to come here” as she meows loudly from the hole in the wreckage. She has not yet been reunited with her family.

Dog rescued from hoarding house – why doesn’t anyone want me?