In Alachua County, Florida, a six-and-a-half-year-old K-9 officer for the Alachua County Sheriff’s Office Swat team died on Friday after he was left for hours in a patrol car, reports Action News. 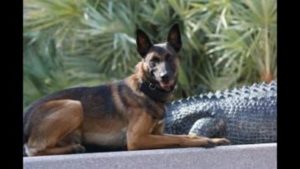 Deputy Tommy Wilcox, the primary K-9 trainer for the sheriff’s office for the past 13 years, was placed on administrative leave Monday after his dog, Robbie was found unresponsive in the back seat of his patrol car.  Earlier in the day, Wilcox assisted the Gilchrist County Sheriff’s Office capture a barricaded suspect who had been wanted in connection with a homicide investigation in Leesburg. It is not known if Robbie had been deployed to participate in the arrest of the suspect.

According to Wilcox, he returned home and joined his family, however did not remember leading Robbie out of the vehicle into their home. It is not known how  long Robbie had been left in the hot vehicle. An investigation is currently underway. The two had been partners for the last six years.

The entire sheriff’s department and Wilcox are heartbroken. Robbie was one of eight  other K-9s at the Alachua County Sheriff’s Office.