You are here: Home1 / News2 / animal cruelty3 / Ailing cow, she will not be suffering anymore 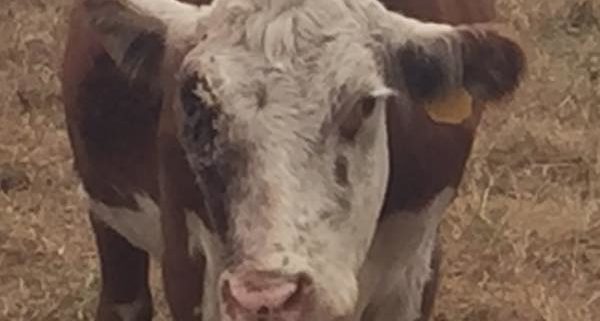 Thanks to a deluge of phone calls to the Harnett County Animal Control in North Carolina, a cow who has been suffering for an unknown period of time will be humanely euthanized today. The suffering cow was discovered this week by a good Samaritan in Lillington, North Carolina.

The woman stopped to take photos, noting that one of the cow’s eyes was missing and half of her face was rotting – the cow was also visibly underweight. Initially, a call to the local animal control resulted in…nothing. Steve, the man that the woman spoke with at the animal control agency, advised her that the cow’s eye was being treated, and he indicated that the cow would be left basically, “as is,” until her calf was weaned.

After an article was written about the concerning situation, things changed. The woman was told by the animal control program manager that phones had been ringing off the hook at the animal control agency. The outpouring of concern prompted him to contact a veterinarian, who will be visiting the ranch today to put the cow down, and end her suffering.

Steve told the woman that, “in the end it was a learning experience to question more.”

Though the outcome is not a warm, fairy-tale ending, it does mean that this cow will not continue to suffer in misery for any longer.

Prior article about the cow here.