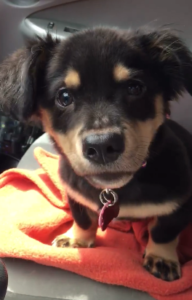 A darling puppy, in the care of the Southern Indiana Animal Rescue, has stolen the internet with his undeniable cuteness. The rescue agency recently uploaded a video showing the mixed-breed pup, named “Napoleon” throwing a tantrum, and cuteness overload quickly ensued.

On Monday, the rescue group commented on the unexpected stardom that little Napoleon was experiencing in a Facebook post to fans – the group wrote, “We can’t believe it!!! Napoleon’s tantrum video has received 1.1million views in just 4 days!!! He is a little superstar!!!”

Suffice to say, Napoleon’s endearing appearance has captured the attention of countless people. The rescue group has supplied a few facts about the pup for those who are interested.

Nobody is sure what breed Napoleon is, but his rescuers believe he is part Corgi.

Napoleon suffers from megaesophagus, which requires him to take medication and eat special “gruel-like mush” from an elevated bowl…once Napoleon’s adult size is known, he will likely be provided with a Bailey Chair, which will allow him to eat in an upright position, to help prevent him from aspirating food into his lungs.

Napoleon’s pint-sized cuteness may be partly due to dwarfism (says his veterinarian), but nobody will know for sure until he grows up a bit.

Right now, despite the intense interest in Napoleon, he is not available for adoption. The rescue group plans on ensuring that his medical condition is manageable and that he remains healthy. Read more about Napoleon, and watch his adorable video, at this link to his rescuer’s Facebook page.