In an isolated area of northeast Oklahoma City, a dog had been left tied to a tree. For a week she suffered in the extreme 100+ degree temperatures with no available food or water. 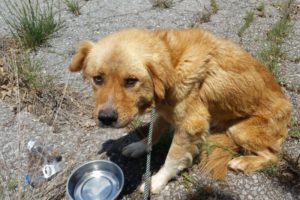 Reyna Silva took regular walks in the same area, and for days she could hear a dog whimpering but couldn’t figure out where the cries originated.

“I felt really responsible because it had been a week since I heard something and did nothing,” Silva told News9.

And on the 4th of July weekend, determined to find where the crying sounds were coming from, Silva went exploring. That’s when she came upon the emaciated dog tethered to a tree with a blue leash; nearly hidden in the tall grass. The Golden retriever mix could barely move. Most likely she had been dumped and intentionally hidden far away from the road to make sure she was never found. That’s when  Silva called her friend Scott Doyle for help.

Doyle and Silva named the dog “Honey Bear” because of her amazing disposition and the dog’s constant desire to be cuddled like a teddy bear.  Doyle is fostering her and nursing her back to health. On a Facebook page set up to keep readers and advocates informed, Honey Bear’s recovery can be followed. 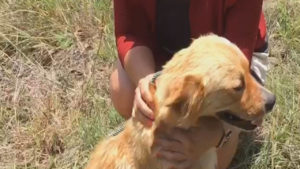 As to Honey Bear’s health, her first veterinarian visit showed her to be anemic, 20 pounds underweight and infested with both hook and tapeworms. Not long ago, she had a litter of puppies and had been suffering with a uterus infection.

Donations can be made directly to Neel Veterinarian, (405) 947-8387; request funds to be placed under the account for Scott Doyle. A GoFundMe account has been set up to help. Any extra funds not needed for Honey Bear will be donated to a local rescue. Once completely recovered, Honey Bear will be eligible for adoption.

Dumped at shelter for being ‘too big’ dog’s death sentence...
Scroll to top