In West Borneo, a baby orangutan had been shot in the shoulder, wounded and left to languish in agony in a local shop. 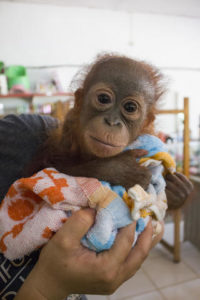 According to the International Animal Rescue, located in Southeast Asia, the baby dubbed Didik, had been abandoned in a store after his new owner discovered it is illegal to keep an orangutan as a pet and didn’t seek medical help. Authorities stated the baby had been wounded as hunters and captors killed his mother to steal her baby to sell for a profit. When the Department of Forestry discovered the ape, they immediately contacted the rescue organization.

Dr Karmele Llano Sanchez, vet and program director for IAR Indonesia, explained Didik had been deeply traumatized by what had happened to him. Sanchez described the look of pain and sadness in Didik’s eyes. 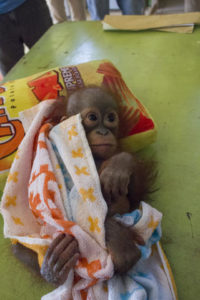 “For an animal like an orangutan, witnessing the death of its mother is a profoundly shocking experience. That is undoubtedly why Didik looks so sad and depressed,” Sanchez explains. “It will take a long time for him to recover from the nightmare he has been through and start to take an interest in his surroundings.”

Estimated to be about 18-months old, Didik suffers from severe malnutrition – his growth has been severely stunted. Unable to even know how to eat, Didik struggled just to open his mouth. He had to be fed using a syringe as the vet staff  prepared baby porridge with a banana for him to eat.

“Our team is doing everything possible to help him survive but he is clearly deeply traumatized by what he has been through. It will take months, even years, for him to recover. Tragically, we can’t replace a mother’s love –” 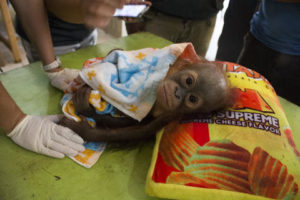 Didik’s latest updates are showing a gradual improvement, and in a Facebook post by the rescue on Monday, the little ape is now eating on his own, trying new foods and beginning to pull himself up and becoming more active.

To find out more about Didik, please click here.

A newer video of Didik feeling better in just a few weeks can be viewed here.