Three tiny dogs suffering from serious skin conditions were  stuffed into a small carrier in east London and dumped on a woman’s doorstep in Walthamstow over the weekend, reports the Evening Standard. 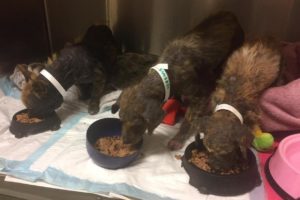 The  Royal Society for the Prevention of Cruelty to Animals (RSPCA) has launched an appeal to the public for information about where the dogs came from or who may have owned them. Authorities have speculated they may have been part of a puppy mill or breeding operation. The dogs were found stuffed into a small pink carrier and could not even turn around or barely move. The homeowner immediately contacted the RSPCA and when Inspector Mitchell Smith arrived, he said he had expected to find three fluffy little dogs. Tragically the circumstances were completely different:

“I discovered these dogs stuffed into the carrier – which was far too small for them… It was difficult to identify what breeds they were due to their poor skin condition. In fact, at first impression, I thought they might even be foxes,” stated Smith. 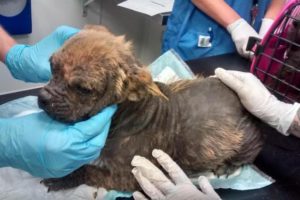 The dogs were taken to the the RSPCA’s Harmsworth Hospital where they were examined and determined to be two-year-old terriers while one looks like a French bulldog; they have been dubbed Mary, Mel and Sue after the Great British Bake Off stars. The dogs will need long term care to regain their strength, their coats and their health. They all suffer from demodex mange and are being treated for diarrhea, starvation, overgrown nails on their feet and baldness. 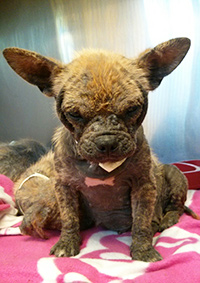 Anyone with any information about these dogs is asked to call 0300 123 8018. Donations for the dogs’ treatment and care can be found here. Their stories can be followed on the RSPCA’s website by clicking here.

Helpless dog found locked in carrier and hidden under a bush City workers use official vehicle to tie up dog and drag it through the streets...
Scroll to top