A two-month-old puppy suffered an agonizing death as it choked on its own vomit after a heartless teenager fed the pup drugs “for fun,” reports the Express. 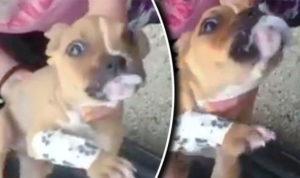 According to news reports, the responsible culprit was a 17-year-old teen from Hungary who lived in Varpalota. An animal rights activist, Laura Antal posted the video and story on Facebook showing the puppy writhing and whimpering in pain as it vomited. As described, the teen thought it was “fun.” Laura’s heart wrenching description as told on her Facebook page (translation) states:

“It’s not enough that she was drugged and our hands died between this little drop of soul, even stolen puppy! Daylight was stolen from a yard out!!! Oh about to watch it more and more in shape we can auction on the shooter / shooters!!! My 17 year old girl / girls should we as punishment!!!
We did the report animal cruelty changes and the drug use and for keeping the original master and has / have for a steal!!!

The disturbing video has already garnered more  than 201,000 views.

Tragically, veterinarians decided to humanely euthanize the puppy who barely started his life; no one knew what drugs he had been given. 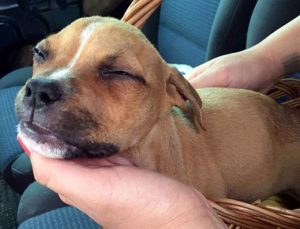 “We have seen so many sad, harsh, cruel disgusting and shocking cases over our time spent caring for animals, but today all of us remain shocked,” Laura added.

The teen is now under investigation and authorities are concerned the puppy may had previously been abused as evidenced by a cast on its leg. Rest in peace little one.

Former owner of German shepherd who bit his leg off to escape trap fails to... Devoted dog perishes in fire while protecting baby
Scroll to top