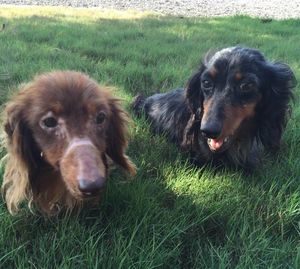 In Guadalupe County, Texas, an area resident stumbled upon two dogs locked in a crate apparently left to die after being thrown into a ditch.

According to the Sequin Gazette, Barbara Upper, the founder of the Animal Rescue Foundation of Texas, who was called to help, stated the long haired Dachshunds had been locked in the crate together for an extended amount of time.

“Those animals were left to die. It appeared they were out there for a while locked in a crate they couldn’t get out of, in a ditch. It wasn’t a matter of a few hours; they were out there for a while. They didn’t have food or water. They were covered in their own feces. They are extremely emaciated and covered in fleas. They are not mean or aggressive dogs. They are really sweet. The conditions of these dogs just bothers me.”

Both dogs were extremely emaciated; the brown one a male and the black and brown one – a female. The female had trouble walking, and the male’s muzzle showed scabbing and scarring as if his mouth had been taped shut. The woman who found the dogs had already started to clean them up by bathing and grooming them to get rid of their fleas and mats. A vet appointment was made to check out their health.

When the news of the dogs’ rescue had been posted on the organization’s Facebook page, one woman was so touched by their plight, she stepped forward to adopt both of them. 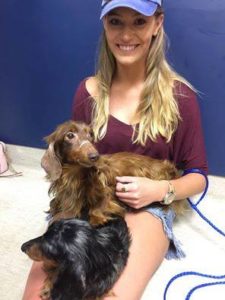 Could there be a happier ending for two beautiful dogs who only a few days ago were thrown away like trash? To help ARF-Texas rescue more pets, donations can be made by clicking here.