You are here: Home1 / News2 / Dogs3 / dog abuse4 / 2 dogs attacked with caustic chemicals in their own backyards
Spread the love
Tweet

“A word of caution” has been issued to all dog owners in Cobh, in County Cork, Ireland; warning dog owners of vicious attacks on their dogs in their own private backyards, reports the Independent. 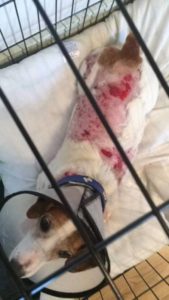 On the Animal Rescue Cobh’s Facebook page, the family of one of the dog’s maliciously attacked in an apparent random act of cruelty posted a heartbreaking update on their dog’s injuries and a warning to everyone:

“… it’s a fright to God when you can’t even keep your own family dog out in the back garden without him being abused. Our family dog, who wouldn’t hurt a fly, has been minding his own business in the back garden when some lowlife poured something over him which has been described by the vet as a sort of chemical. The holes in his back are from someone poking him with an iron through the fence. So everyone please keep an eye on your dog…” 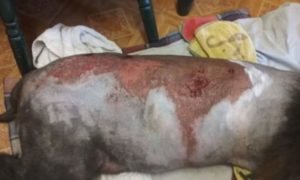 The family is devastated that anyone could do this to their sweet dog. And what is even more concerning for area dog owners is a report about a similar act of cruelty less than two weeks prior occurring in Ballincollig in County Cork. That dog received similar injuries to her back while the owner had been at work. At this time, it is not known if the chemical used was bleach or possibly rat poison, but for the dogs to have stayed still while the burning chemicals were poured on them is unlikely unless they were intentionally held down while they were stabbed and tortured.

Apparently animal cruelty has no geographic boundaries, and until the torture and abuse of companion animals are treated as real crimes, and the punishments reflect the severity of the deeds, random acts of cruelty will continue. Both dogs are expected to survive.

Report any suspected act of animal cruelty. Be the voice for those who cannot speak. 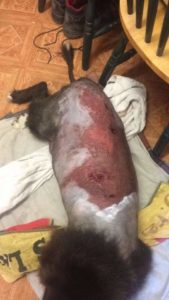 Photos via Facebook Animal Rescue Cobh. No portion of this article can be rewritten or distributed without permission form Pet Rescue Report.