In Hartford, Connecticut a heartless owner shoved two Chihuahua dogs into a cage with no food or water and abandoned the helpless pooches behind some bushes, reports  NbcNews. 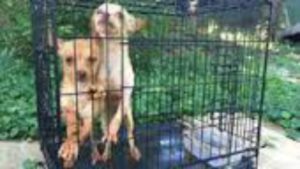 The dogs were discovered by Gilbert Rivera and Calvin Mann, in the area of East Elliot and Ledyard Streets, as they walked home from work early Monday morning. The cage had toppled over and the dogs were frightened, covered in feces and shivering from the cold morning temperatures. When police arrived, the pups were placed in the sun to warm up and provided with water.

“People way that dogs are like your kids so to do that to a dog especially the dog that small there’s no excuse of it,” stated Rivera.

The dogs were transported to a local veterinarian for examinations and then taken to the Hartford Animal Control. The Hartford Police are asking citizens for help identifying the owner of the dogs. Anyone with information is asked to call 860.757.4000.