In Smithtown, New York, a 14-year-old neglected miniature poodle was discovered Tuesday morning tied to the front gate of the Smithtown Animal Shelter with an oxygen tube. 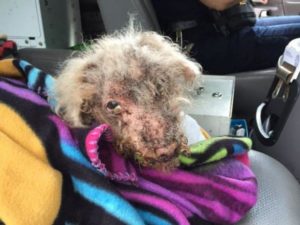 According to Roy Gross, Chief of the Suffolk County SPCA, on August 2, the agency received a call with details of how the dog had been abandoned at the shelter. The male poodle was emaciated and in critical condition; he was covered with fleas and his eyes were filled with discharge. The dog was transported to receive veterinary care. He is anemic from a severe flea infestation, and his eyes are now being treated.

He is eating and resting comfy,” the shelter wrote on its Facebook page to followers. “He is in good spirits.” 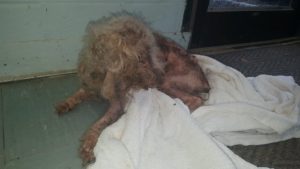 Now named Chip, the little guy is truly getting a second chance. A staff member has already fallen in love with him, and when he is well enough, he already has a “forever” home. To help with Chip’s veterinary expenses, please click here. 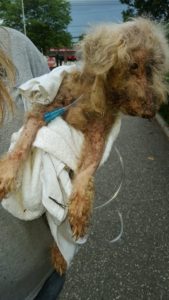 Anyone who recognizes the dog or who has information on its owner and/or who left the dog at the shelter can call, in confidence, the SPCA at 631-382-7722. Newsday reports of special interest is information on the driver of a dark, compact, four-door sedan caught on surveillance video outside the animal shelter in Nesconset. A $2,000 reward has been offered for information leading to the arrest and conviction of the person responsible for this cruel act.

The charge of animal cruelty is a misdemeanor and carries a penalty of up to a year in prison and/or a $1,000 fine.