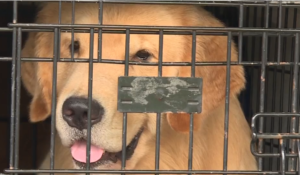 A tripped circuit breaker is being blamed for the death of 14 dogs who were left inside of a vehicle which was parked outside of a motel in Roseland, Indiana, reported Sunday’s publication of the South Bend News. The dogs, said to be golden retrievers and one spaniel, died after the specially equipped box truck’s air-conditioning system failed on Friday evening.

The dogs, who were being transported and cared for by someone with Lakesyde Kennels and Handling of Wellington, Ohio, were in town for an American Kennel Club dog show which was being held at the St. Joseph County Fairgrounds.

According to WSBT News, the handler plugged an extension cord between the truck into the hotel’s power supply before going to her room for a nap – a circuit breaker inside of the box truck tripped while the woman was away and by the time she returned to check on the dogs, they had all died from heat exhaustion.

The tragic situation is being investigated – initial findings indicate that it was a terrible accident, rather than a criminal act.